What are meeting minutes?

Meeting minutes are the tangible records taken in a meeting that are used to inform attendees and nonattendees of what was discussed during the meeting and define the required next steps to keep the conversation or project on track. Meeting minutes allow people who didn’t attend the meeting to get caught up on what was discussed. This condensed document also suggests what topics to revisit and inform future decisions in follow-up meetings.

Not only are meeting minutes used to benchmark key topics discussed in meetings, they are also used as records so that anyone not on the call or in the meeting room can catch up on what was discussed, minus the bias and small talk. Here are a few good reasons why meeting minutes enhance the way you meet:

Capture the overall purpose of meeting

People don’t meet for fun. There’s always an underlying purpose of a meeting being called. Good meeting minutes not only tell people why the meeting was held in the first place, they also jog memories of tasks that need to be done.

Record votes on decisions being made

By writing down big decisions made during the meeting, you put you and your colleagues a step ahead for any follow-up meetings. Capture motions or votes made in the meeting room to clarify for attendees and nonattendees when, why and how these decisions were made.

Plan the next steps for future meetings

A meeting is never just one meeting — there are always follow-up syncs and tasks people need to do. By recording what needs to be done before the next meeting happens, colleagues can easily keep track of what they need to do to prepare for the next call.

Logging what items are actionable throughout your meeting makes it easy for attendees to know what they need to do when the meeting ends, without diverting attention from what is currently being discussed.

How to write the minutes of meetings

Lots of organisations, groups, and businesses have meetings where a record needs to be kept of the proceedings and decisions made. Somebody in each case needs to write the minutes of meetings. 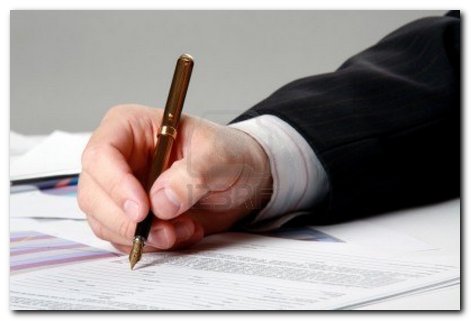 The minutes of meetings are a record of discussions and decisions, and over time they might form an important historical record (in the case of a government’s war cabinet for instance).

The amount of detail recorded will depend upon the type of meeting and maybe its historical culture. Some organisations like to have a record that captures the spirit of the discussions that took place; others put their emphasis on the decisions that are made.

One thing is certain: the person taking the minutes is not expected to give a dramatic or poetic description of what takes place. The minutes of a meeting are a summary, recording its most important features.

You can get an idea of the culture and style of the group by looking at the minutes of previous meetings. These will give you a guide to the amount of detail normally required and the way in which decisions are recorded.

Different types of meetings record these details in various styles. A group of parents running a children’s football team does not require the same degree of formality as a managing board of company directors. Roughly speaking, there are three types of minute taking

These will give a brief information on time-date-place, who was present, and details of decisions or resolutions passed. These can often be compressed onto a single side of A4 paper.

A document of several pages, with headings and sub-headings, and maybe numbered points. These might provide a record of the discussion in summarized form, along with named individuals given specific responsibilities, plus any deadlines for action.

The Role of a Minutes Secretary

It’s important that the minutes secretary follows the progress of the meeting carefully, recording major items of debate and decisions that are taken. The published agenda is a useful template by which to take notes during the meeting. This keeps the order of topics and the structure of the meeting intact.

Some types of meeting even require a record of who spoke to the issues on the agenda, and what points of argument they made. In such cases, a summary rather than a verbatim record is appropriate.

Writing the minutes of meetings

If the discussion was about The Allied and Providential Assurance Company for instance, you would not write out that name in full ever time. APAC would be a perfectly useful abbreviation in your notes.

Many people find it difficult to listen carefully and make notes at the same time. This becomes even more difficult if they are an active member of the meeting. For that reason a minutes secretary is not normally expected to participate as fully in a meeting as the other members.

If the meeting is not too big, you can probably record people’s contributions using their initials (KP, HT, MA) rather than their full names. You can also do this in any minutes so long as the names appear in full in the list of attendees.

The first time the name of an organisation is mentioned, it should be spelled out in full – as in Product Management Corporation, or the Queen Elizabeth Jubilee Trust. Thereafter, you can use acronyms formed by the initial letters of its name (PMC and QEJT). In very big meetings, these names and acronyms are often listed in an appendix.

Prepare in advance as much as possible. Make sure you have a copy of the minutes of the last meeting, and that they have been circulated to other committee members. Making a record of a meeting is always easier if you know the agenda in advance, and even if you know who might be in attendance.

If you don’t know the attendees, wait until the meeting has started, then circulate a blank sheet on which people are asked to PRINT their names. Don’t circulate this attendance sheet before the meeting starts, because if some people arrive late, the chances are that they will be missed.

It might happen that an item on the agenda is not discussed or is deferred for some reason until the next meeting. You should nevertheless record this fact, so that a future meeting is able to check on the status of the item and decide if it is still relevant.

Some meetings can generate discussions which become arguments, with differences of opinion expressed quite forcefully. A great deal of tact and diplomacy is required in recording such discussions.

The best way to deal with such occasions is to record the fact that there was disagreement, but without going into any details. You can use a form of words such as ‘There was disagreement concerning the choice of contractor for the project, but following discussion it was agreed that …’

A Sprint Planning Meeting Agenda will help to avoid unanticipated obstacles and make sure everyone knows who’s accountable for what and who is authorized to make decisions on any given issue that may arise.

The professional agenda / meeting minutes example for a sprint planning meeting below starts with the Goal, so that everyone knows what the purpose of the meeting is. Collaborate with other stakeholders to determine the Goal.

Then refine your Backlog as you create the agenda. The Backlog is a complete list of what the product requires and in what chronological order. Presenting the Backlog is part of mapping the progress in the project so far.

Epics to be Delivered

Notes and Takeaways and Actions

The Notes and Takeaways section, and the Actions section, confirm what has been decided, and who is responsible for owning any given part of the process. 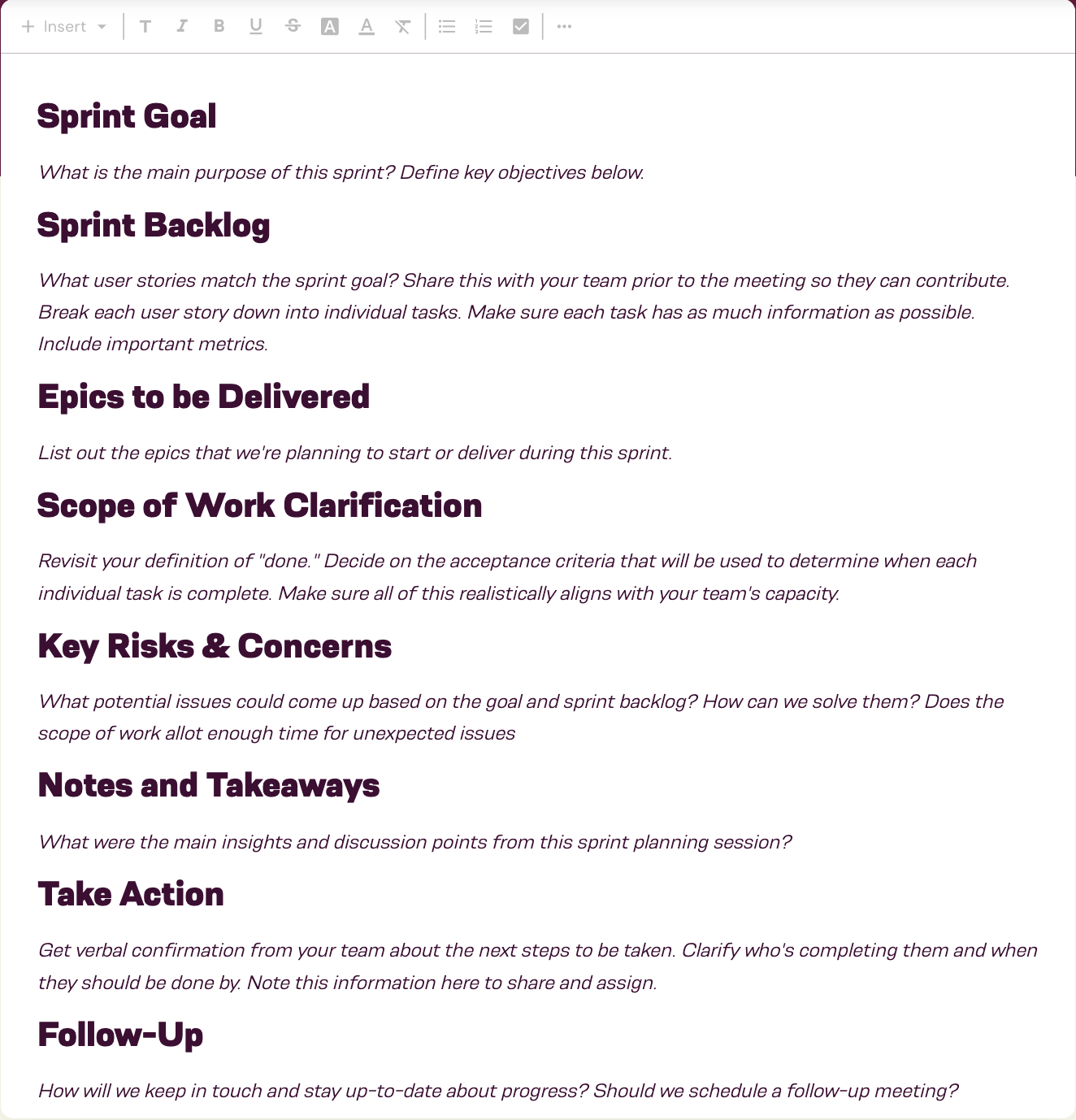 But the one thing that One-on-One meetings require, and is often overlooked, is an agenda. The need for a One-on-One Meeting Agenda can be overlooked because a one-on-one meeting may seem simple, because it’s just between two people.

Why One-on-One Meetings Need Agendas and Meeting Minutes, Too

The worst thing about meetings – any meetings, even one-on-one meetings – is their poor management. Poor management of a meeting wastes people’s time and saps their energy. And people naturally dislike that.

On the other hand, well-managed meetings multiply an individual’s accomplishments as part of a team, and thus are the opposite of wasting time. Individuals naturally thrive based on such meetings.

One-on-One meetings are no exception. When you attend a One-on-One Meeting, you have the more opportunity than in any other meeting to affect the outcome. It can be goal-oriented, directed, documented, and energizing. 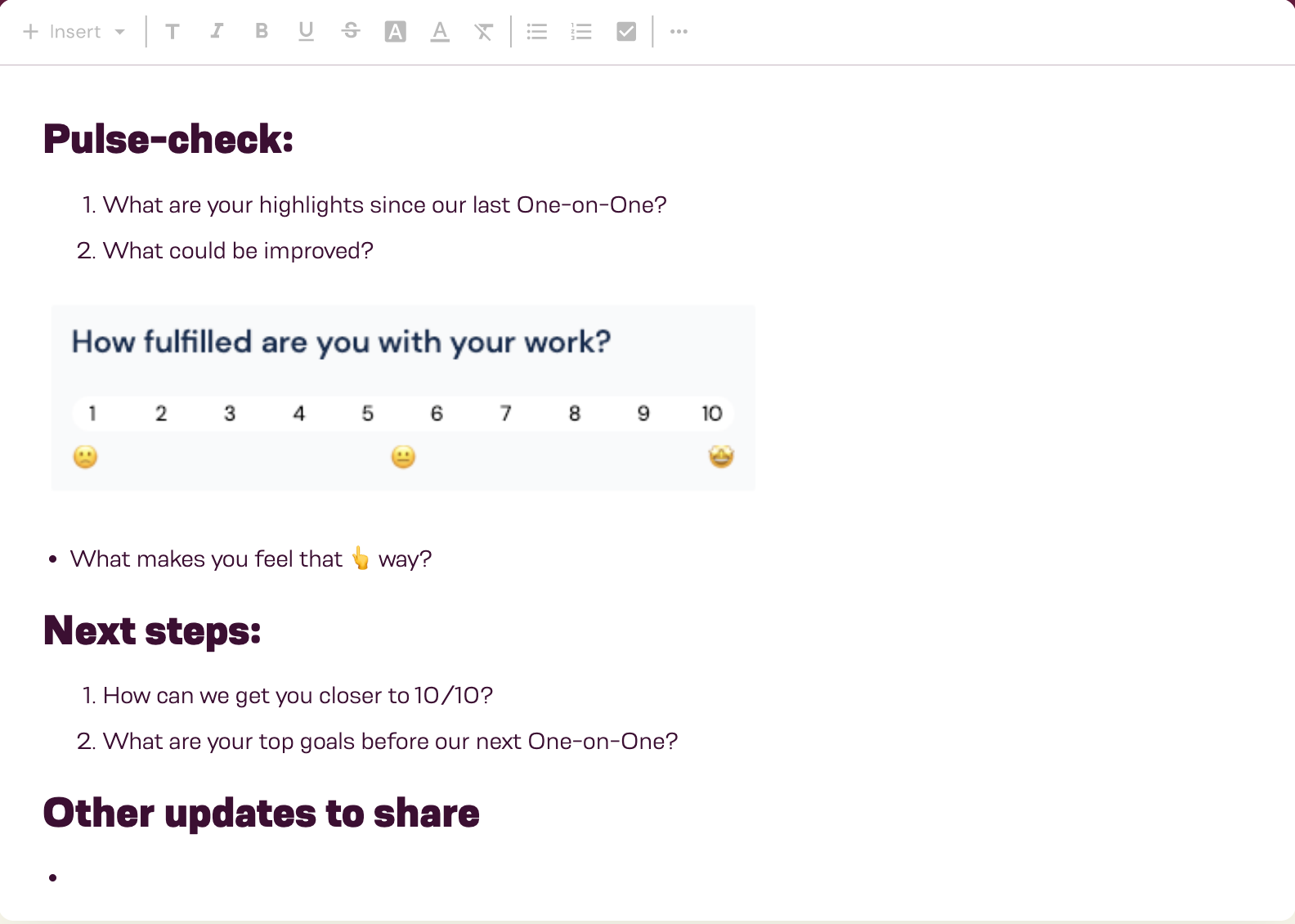