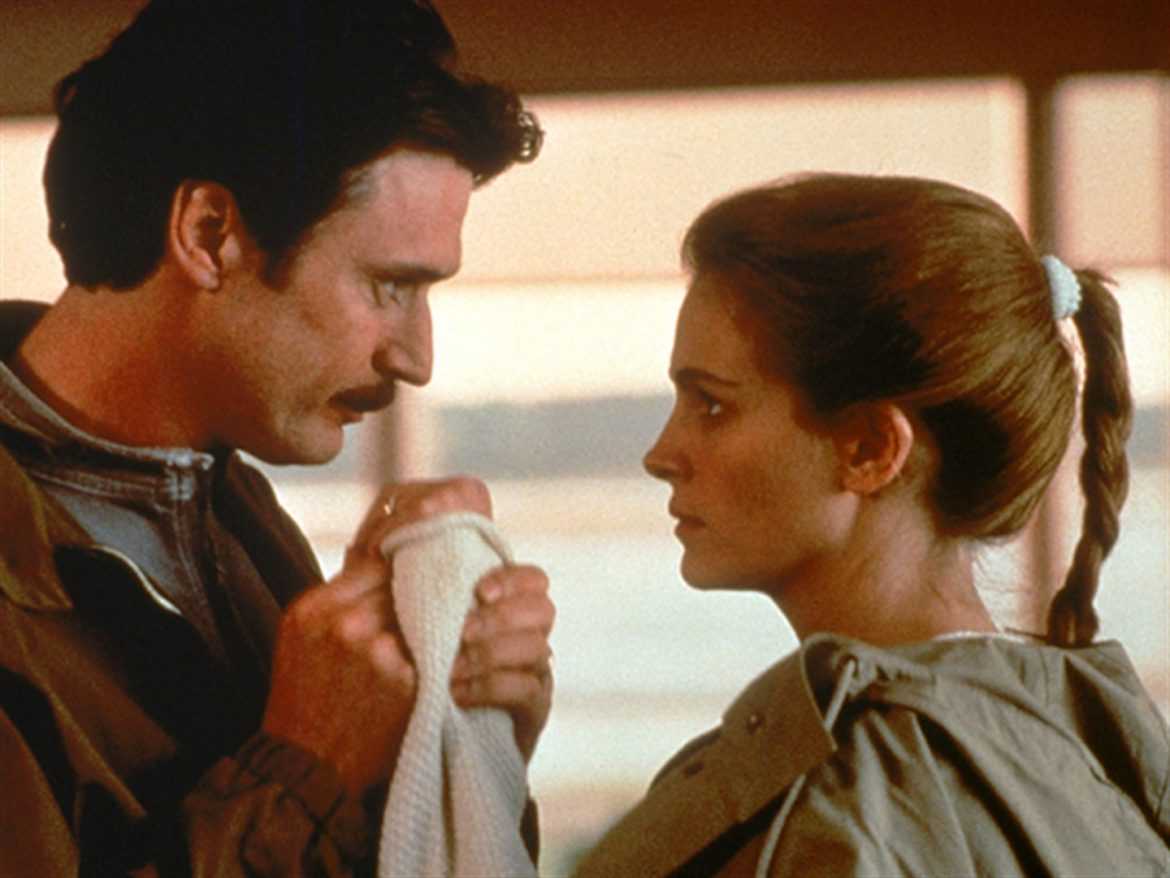 Cases of gender based oppression have increased in today’s society due to failure in communication. Men and women in most cases exercise their superiority, by demeaning each other or violent force something that leads to one gender being disadvantaged. Men dominating women is the most common and evident situation. Men often dominate the women and thus oppress them in various ways. The movie “Sleeping with the Enemy” presents the life of a young woman, Laura, who battles with constant abuse and mistreatment from the husband. Although Laura seems to be well to the outside world, the movie brings out the darkness of her life. With a wealthy and attractive husband, Laura appears to be blessed. Their big mansion is built on the coast and Laura has the choice of either working or not. Laura beside all this undergoes daily tribulations and ridicule from the husband. At the start of the movie, Laura is seen as a young woman who undergoes constant discouragements from her husband Martin. Her daily wish is to strive in order to make him happy although her efforts appear to be meaningless. After persevering the ridicule and mistreatment for four years, she resorted to change her perception of being a victim into a strong survivor. Martin burns in the movie is used to present the domineering, overbearing and the psychotic husband. This trait makes him to regularly exercise superiority over his wife through regular beatings and control on her dressing and actions. Laura through her strategy manages to escape the brutal treatment by her husband through stage managing her death. Although he finally realizes that she is still alive, Laura was able to enjoy his life again away from the torture (Salmon, & Angood 2013).

Proper communication between couples serves a long way in ensuring they develop healthy relationships. It brings about an environment of understanding and mutual respect between either couple and ensures that there are no instances of male superiority or any domineering attitude (Kaphingst, Blanchard, Milam, Pokharel, Elrick, & Goodman 2016). The fact that all the relationships have their ups and downs calls for the need of proper and efficient means of communication in order to ensure that a common ground is reached. The movie “Sleeping with the Enemy” depicts a situation of communication breakdown between Laura and her husband. Martin in many occasions exercised destructive forms of communication through constantly yelling at his wife and issuing instructions on how she would undertake her duties. The movie brings out a woman full of doubt on every decision she makes on whether it will gain favor with her husband or not. Martin utilizes his failure to heed to proper communication channels that would lead to a healthy relationship to extend his torture on Laura. Instead of advising her during situations he thought Laura had not undertaken a specific duty according to standards, Martin gave her beatings without any explanation.

The dark aspects that exist in every relationship can be addressed through appropriate communication patterns. The society’s perspective is that increased understanding amongst the couples through regular sharing of thoughts leads to a productive relationship (Prayag, Hosany, Muskat, & Del Chiappa 2017). The challenges such as lying can be avoided when there is a free environment full of understanding cultivated through free and adequate communication. Lying in a relationship can be evidenced when the partners don’t have regular engagements and thus might not realize when one partner is lying. Vices such as anger and aggression that in most cases lead to the breakdown of various relationships require the intervention of various measures that can only be brought up through proper communication channels. Through the communication, the partners are able to reach a common ground on the issues facing them. By the couples setting up enough time that will be used to discuss several issues affecting them, they will be able to come to common ground in order to ensure that the discussion is a success. Judging the impact of the words before mentioning them is also important as it will prevent the other partner from being hurt by the words. Many relationships fail not because of lack of communication but because the communication is not done in the correct manner. Referring to the case of Laura, the constant shouts from Martin regularly destabilized her actions because it made her act with a lot of fear. Paying attention to the opinions and feelings of the other partner is also mandatory if communication is to be a success. Getting the ideas of others shows that you appreciate their concern and thus they will be able to also appreciate your point of view in various circumstances.

Cultural and social taboos form a big part in the shaping of individual behaviors especially the use of violence. Full discussions and concerns have never been voiced out in the required manner due to the stereotype developed through the cultural taboos. Cultural beliefs can serve to end violence in relationships or heighten them to extremely high levels. Many cultures have embraced the idea of male dominance in the society and thus accords them special privileges over the women. The idea that the man is the head of the family in many cultures has been defined to mean that they are the overall decision makers of the family. The perception of the women being a weaker gender and only play the role of subordinates is something that has seen them experience various traumas (Prayag, Hosany, Muskat, & Del Chiappa 2017). The cultural taboo is passed from generations to generations and enshrines the social standards in the society. The cultural perspective of the society in many cases does not see oppression accorded to the women as wrong because it is a community belief. The discussion on the evils depicted in the relationships is sometimes not fully brought out because of this common misconception that the women’s role is being subordinated. Women in many cases do not get a chance to speak against their mistreatment as the society will perceive that they are being disrespectful to their husbands. In many cultures, it is hard to find the women talking about how they feel because they have been made to believe that their position is only to serve the men.

Issues such as sexual violence do not find themselves in the public limelight of various cultures. This is because the cultural setting sees sex as a man’s right and thus must be accorded to him at any time. Some people believe that the biggest role of a woman is to satisfy the sexual desires of their husbands. Bringing the topic of sexual violence to such a community setting is thus not acceptable as they do not find anything wrong with it. Like in the case of Martin, he could still sleep with Laura even after beating her. The perception of women being sexual tools must be fully addressed in order to ensure that the women are able to voice out how they feel about their sexual partners. Through proper engagements in a relationship, the partners are able to come up with appropriate ways of engagement in order to improve their relationship. The concept of women not having a role in the running of the family is also another notion that prevents fruitful discussions such as the end of abuse in the relationships. The women in many situations are not provided with an opportunity to present their feelings and thus the discussions do not take place. Poor educational backgrounds in many instances promote the notion of male superiority and thus justifying the oppression based on gender. When the community is not enlightened on the importance of appreciating each and every member, cases of oppression are bound to rise. The lack of adequate knowledge thus makes many people believe that the violence in the relationships is justified.

In conclusion, the movie Sleeping with the Enemy brings out a clear picture of the oppression many women face because of gender dominance. Martin displays a clear picture of what the belief in male superiority can do. He expects Laura to perform all the duties in the house perfectly and in line with his expectations. The communication breakdown between the two creates an atmosphere of torture and fights. Many people still hold to the belief that the women only hold subordinate positions to the men and thus the women continue to feel the effect of male dominance. Proper communication mechanisms are important in ensuring that there is a mutual understanding of the relationships.